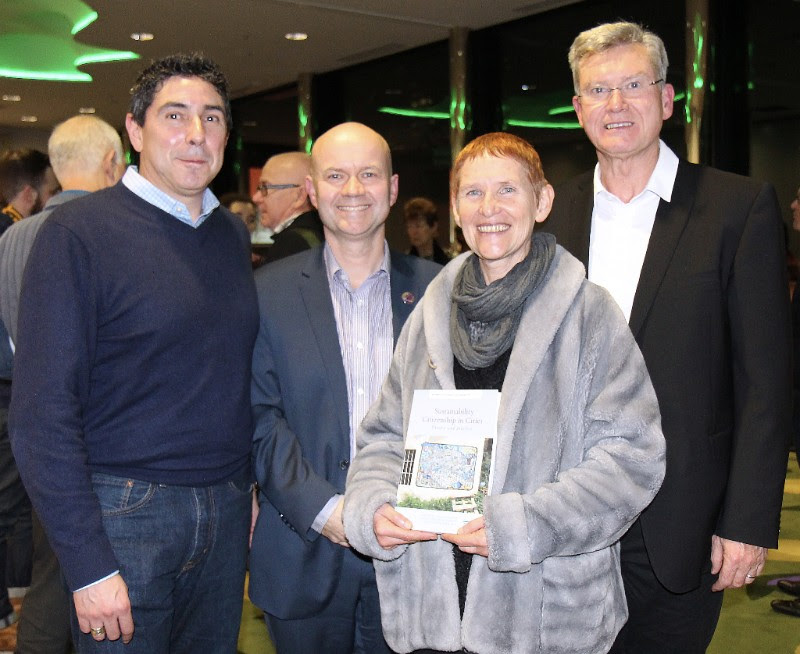 The recent launch of the book, Sustainability Citizenship in Cities: Theory and Practice, edited by Ralph Horne, John Fien, Beau Beza and Anitra Nelson, asks; What roles might citizens have to provide leadership and action on future environmental sustainability in the context of the neoliberal city? Sustainability citizenship is the emergence of citizens’ collective responsibility, rights and action that coincide in the socio-environmental transformation of cities. Urban sustainability citizenship situates citizens as social change agents with an ethical and self-interested stake in living sustainably with the rest of Earth. Such citizens not only engage in sustainable household practices but respect the importance of awareness raising, discussion and debates on sustainability policies for the common good and maintenance of Earth’s ecosystems.

Rather than accept individual over collective rights, or economic over social and environmental values, citizens are working together to challenge neoliberal norms, to act on ethical grounds, and to experiment together, to forge new paths and practices in the city. With examples resembling the abundance and range of food sharing practices identified in the SHARECITY 100 Global Database, people are connecting in innovative ways – often virtually – to embark on social and solidarity economy initiatives, cooperative, collaborative enterprises, often as forms of alternative economies. These are predominantly urban practices, with the book seeking to “examine social and cultural processes in the city as part of living, breathing socio-material infrastructures” (p.4). 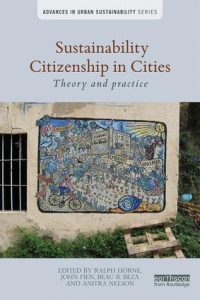 Chapters that speak directly to the interests and aims of SHARECITY include those that discuss ICTs and collective mobilization (Chapter 9: Urban social innovation: Mobilising sustainability citizenship), the power of rhetoric and delivery in sustainability communication (Chapter 5: Sustainability citizens: Collaborative and disruptive social learning; Chapter 14: Communicating sustainability in the city), the potentialities of creating learning cities (as a place that itself learns and gets better at problem-solving and governance – that can learn from its own and others’ experience and then do better” (Duke 2013: 8,11, in Chapter 15: The learning city for sustainability), and urban food sharing examples such as ‘Mobile Edible Garden Installations’ and a spectrum of ethical consumption activities (Chapter 16: Curating the city: Encouraging sustainability; Chapter 17: Ethical consumers and sustainability citizenship). These insights from practical experiences of community-driven sustainability engagement serve as useful contexts in which to consider the meaning-behind and future-in-front of ICT-enabled food sharing practices. To re-think cities as innovation hubs, to consider a broad spectrum of digital participation (from mobile apps to hacker labs) and how these are employed (Ie. “A birds-eye view helps the user produce different effects of meaning while an immersive technique – situating users within the streets, parks and factories – helps produce meaning that reasonates with users’ personal experiences” (Bendor 2013 cited by Greenfield p.173), and to seek out to see if such developments are influencing citizen engagement towards innovative forms of ‘urban care’ (Chapter 9: Urban social innovation)? To indeed ask if contemporary food sharing practices have the character to link “to places beyond” (Dorreen Massey cited by Hulbert, p.191). 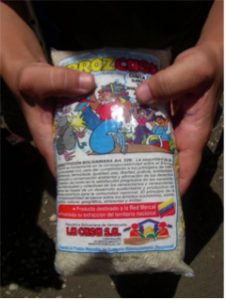 In the chapter, ‘Urban food security and alternative economic practices’, I engage with the pressing global concern of food security to explore how alternative food economies are emerging in cities of the Global North and South to assuage concerns for hunger and desires for autonomy and food soveriegnty. Drawing on my doctoral research, the chapter posits the ‘gleaning, growing and gifting’ of foods in Sydney, Australia, against the emergence of the food sovereignty movement in Venezuela, a nationwide alternative food system that comprises multiple levels and strategies, linking government policy and institutions with collective community engagement. In Venezuela’s case, ‘gleaning’ refers to the redistribution of idle lands for food production, ‘growing’ to Gran Mission Agro-Venezuela’s goal of increased rural and domestic production; and ‘gifting’ to the goal of equitable, accessible food distribution strategies to offer subsidized, regulated, and free food for all. A lens of autonomy is adapted to analyze the significance of non-capitalist food economies for social change; where ‘autonomy of thought’ and ‘autonomy from the system’ is demonstrated through social food economies existing both outside, within, and beside, the neoliberal marketplace. Although the outcomes of Venezuela’s socialist food movement have been severely restricted by recent political and economic upheavals, Venezuela joins Australia in demonstrating both grassroots and government desire to enact and embody collective rights towards food justice.

There are many more inspiring examples of sustainable citizenry in this book! Sustainability Citizenship emphasizes practical and collective transformation rather than discourses based on legal, prescriptive, ideal or philosophical rights and duties. Its case studies and analysis are both interdisciplinary and evolving, with contributors exploring the theme in the dynamic context of austerity governance and climate change in an increasingly urban world. The book has four parts: ‘framing sustainability citizenship’ discusses theoretical frameworks; ‘housing and social innovation’ deals with ‘materialities’ such as housing, workplaces and digital devices; and ‘place, access and equity’ examines gender, indigeneity, and multiculturalism in the life of the city, to ask: How is sustainability operationalized and practiced in urban precincts with distinct cultural and demographic characteristics? How can health, safety and liveability be preserved and enhanced in cities? The final section, ‘citizen participation’, explores how citizens collaboratively learn, communicate and experiment towards change. Case studies and analyses are situated predominantly the Global North (Australia), with Latin America (Colombia and Venezuela) emblematic of the Global South.

The scholarship within ‘Sustainability Citizenship’ joins others of its ilk on topics of urban sustainability, activism, and social justice, namely Untamed Urbanisms, Just Sustainabilities, Environmental Citizenship, Rebel Cities: From the Right to the City to the Urban Revolution, and The Just City. Together these volumes contribute a crucial role as sustainability citizenship is continually marginalized by supporters of the neoliberal ideal, “where action for the ‘common good’ and for the good of ‘the commons’ tends to lie in the margins of discourse” (p.2).

“This edited collection is a valuable contribution to our understanding of the relation between citizenship and environmental sustainability. The authors approach sustainability citizenship as a work-in-progress, but the focus on its practical articulations — emphasising collective responsibilities, participatory democracy and ‘being’ rather than ‘having’ — provides conceptual coherence to the volume.” – Benito Cao, Lecturer in Politics at the University of Adelaide, Australia and author of Environment and Citizenship (2015)

“Finally, a bid for the future that is different, imaginative and realistic: a vision which every reader can (perhaps should) help bring to life; a work that is not only against neo-liberalism, but is for an achievable humane alternative that is good for the world – its biodiversity, its sustainability and the wellbeing of its stewards. A must-read within and beyond urban studies.”– Susan J Smith, Honorary Professor of Social and Economic Geography and The Mistress of Girton College, University of Cambridge, UK

“Achieving voluntary behaviour change to sustainable forms of living and consumption practices represents one of the grand challenges of the 21st century. The model ofsustainability citizenship advanced in this book represents a critical and under-researched pathway to this transformation — beyond that more commonly focused on individual attitudes and behaviours.” – Peter W. Newton, Research Professor in Sustainable Urbanism, Swinburne University of Technology, Australia

“Sustainability citizenship is a concept which can constructively move discussion of social change for sustainability well beyond the limited framings of neoliberal discourse. This unique collection takes a major step in advancing understandings of sustainability citizenship by making clear that it is not only an abstracted idealist concept but something happening, and shaping the future, now.” –Matt Watson, Senior Lecturer in Human Geography, University of Sheffield, UK

“This timely, comprehensive volume firmly ties the epic statement ‘global environmental crisis’ to human experience in the urban age. In stories charged as much with hope as danger, its contributors make clear that the serious species threat posed by the ecological crisis is just as much an opportunity for myriad forms of sustainability citizenship to evolve and flourish.” – Brendan Gleeson, Director at the Melbourne Sustainable Society Institute, The University of Melbourne, Australia

Share This:
« SHARING LAB 2: What is Digital Ethnography? Researching on and off-line communities
Feeling out alternative food movements : food justice, food sovereignty, and the visceral »