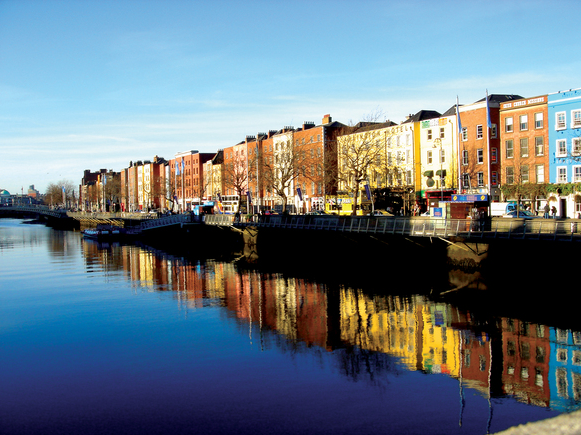 Dublin: How a new wave of innovative enterprises are changing the face of food sharing

What we eat and how we eat it has social, economic and environmental significances. The sharing of food, a custom which has existed since hunter-gatherer societies, has the potential to create more sustainable food systems by conserving resources, reducing waste and shifting food from those with a surplus to those with a need. We don’t have to look further than SHARECITY’s base in Dublin to appreciate the full spectrum of food sharing forms and models, and to see how a new wave of innovative enterprises are changing the face of food sharing today.

The practices of donating and sharing food through food drives, food banks and soup kitchens have been recognised in Ireland for many years, but have come to greater public attention following the recent period of austerity. The Simon Community has been providing food to those sleeping on the streets since 1969 on their nightly soup runs, and there is an established tradition of providing food to those in need amongst Ireland’s religious communities. The Capuchin Day Centre is a charity run by a Christian order of monks who provide food free of charge to people experiencing poverty and homelessness, and Crosscare, the Social Support Agency of the Catholic Archdiocese of Dublin, operates a number of food services including food banks, meals on wheels home services, and community cafes.

Yet in recent years technology has changed the way we interact, expanding our social networks and creating new forms of giving and sharing, often referred to as the “collaborative” or “sharing economy.” Building on the proliferation of mobile apps and “peer-to-peer” sharing platforms, FoodCloud connects businesses with unsellable yet edible surplus food to charities via mobile notifications. In a different sphere of food sharing a plethora of web and app based “meal sharing” platforms have also arisen (such as ShareYourMeal, MealSharing, Bookalokal) which allow home chefs of all skill levels to offer a dining experience to any interested parties. The costs of materials and labour is paid for and trust is built on chef and diner reviews and profiles.

As a concept “food sharing” encompasses much more than just the simple exchange of food products. Sharing land, tools and knowledge through community gardens and allotments is becoming increasing prevalent throughout the world and Dublin is home to a burgeoning network of urban growers. In Dublin, urban growing does more than provide herbs and vegetables, it also builds and strengthens community ties and makes a social impact. The CHANGE Community Garden in Coolock aims to address issues of food poverty through horticultural training and by providing locally grown produce to garden volunteers and community members, as well as offering a space for locals to connect with nature. Our Farm, one of Dublin’s largest community gardens, occupies a formerly derelict site next to the National College of Art & Design and has provided educational workshops and an ecological outlet for both students and the wider Liberties community since 2014.

Urban Farm, a Dublin-based agricultural start-up dedicated to “helping to create an efficient city by growing fresh local produce” has been behind some of Dublin’s most exciting and innovative recent projects. These include an urban rooftop garden (formerly) located atop the Chocolate Factory which upcycled materials to grow an assortment of fruits and vegetables, the Social Hops project which invites communities to collaborate with microbreweries by growing hops in garden spaces in exchange for locally brewed beer, and the Urban Oyster project which repurposes residential and commercial coffee grounds by providing growing kits which use the organic material to produce oyster mushrooms.

In other commercial spheres shared kitchen spaces are becoming popular for food start-ups to get off the ground. As well as supplying space and equipment, sites like Hour Kitchen in Churchtown, Dublin 14 and Newmarket Kitchen in Bray, Co. Wicklow are providing practical support and networking opportunities for their food entrepreneurs. The Fumbally Stables not only offers a rental kitchen but also facilitates workshops in food-related skills such as fermenting and pickling.

Food Sharing is also occurring outside of familiar and regulated domains. Open sourced mapping sites such as Falling Fruit and Ripe Near Me map the location of forageable produce in urban areas, both on public and private land. “Dumpster Diving”, the salvaging of food waste from commercial bins, has been used to source food for radical food movements such as Food Not Bombs, as well as donation based vegan cafés at Dublin area squats and gardens. One of Dublin’s most prominent squats, The Grangegorman Community Collective, whose gardens were bulldozed during last year’s eviction, is now once again occupied and collectively planting and growing food.

Food Sharing in all its different forms has the potential to change the way people interact with cities, and the way cities interact with the natural environment. Many of Dublin’s food sharing initiatives are in their formative years and the SHARECITY project hopes to become a resource for the Dublin food sharing community, by co-creating a database of food sharing activities, and providing opportunities for practitioners and researchers share their skills, knowledge, and experience. In the meantime keep an eye on future blog posts which will look at innovative and inspiring example of food sharing from cities all over the world!

Other food sharing activities in Dublin worth mentioning include: