Published by Monika Rut on the 6th September 2017. 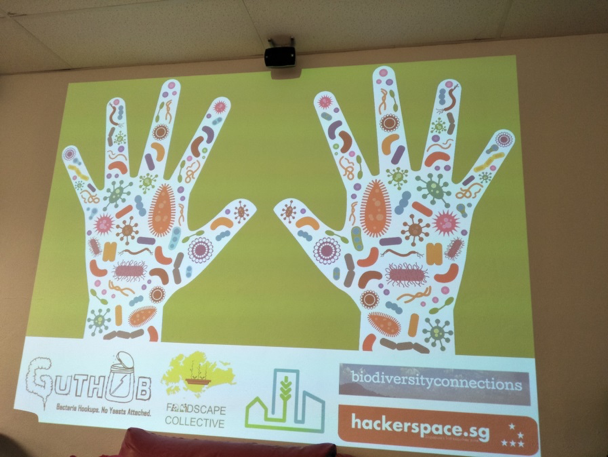 Just a week before concluding my fieldwork in Singapore, together with Fermentation GutHub and Foodscape Collective, we organized a workshop on food sharing in the HackerspaceSG. The idea of the workshop came about in conversations about food sharing in the context of smart city with designer and NUS researcher Marketa Dolejsova. Focusing specifically on food as a medium and sharing as a collaborative urban practice we wanted to address the questions of:

What kind of food and related knowledge resources have people traditionally shared and how is this changing in the smart city context?

Which food sharing technologies are out there, who is using them and for what ends?

What policies, initiatives and ways of collaborating shape food sharing in smart cities?

What are the social, economic and environmental impacts of smart food sharing?

The workshop consisted of three streams of discussion as well as a mapping session that lead to different understanding of food sharing practices in Singapore. First, Marketa Dolejsova spoke about food sharing through various fermentation-related activates such as starters swap and fermentation bank. Introducing Fermentation GutHub as an online community of bacteria enthusiasts interested in traditional fermentation practices and DIY food citizenship Marketa presented an idea of “fermentation biogeography” through open source food mapping initiatives such as StarterSwarm map. 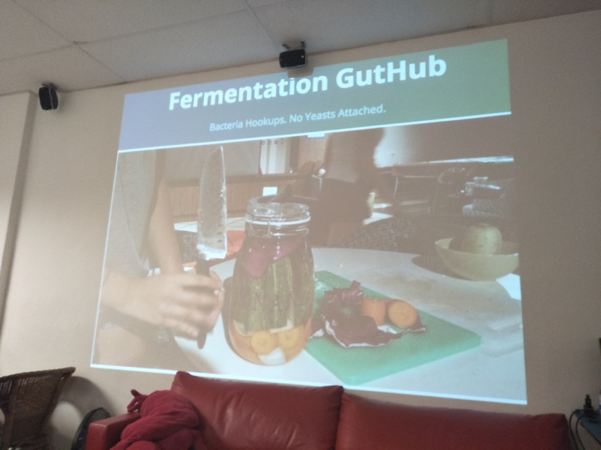 In the second stream of discussion on #FollowYourFood I spoke about my everyday experiences of performing ethnography with selected food sharing initiatives in Singapore. In the last three months, I followed multiple food-paths through rooftop gardens and urban farms, soup kitchens and food banks, food storage rooms and pantries, private homes, kitchens and fridges, food redistribution routes, regulatory frameworks, wireless and mobile networks and more. Reflecting on sharing practices in the context of SMART city, I addressed the importance of collective infrastructures (i.e. forms of knowledge, believes, judgements and rules, informal networks and spontaneous organizations) that are important in fostering food sharing movements in Singapore. Together with participants, we also discussed whether sharing-food incentives more collaborative behaviours through an example of public fridges in Tampines; how consumers value food when gifted or sold; and what is the role of religion, traditions, and memories in food sharing processes. 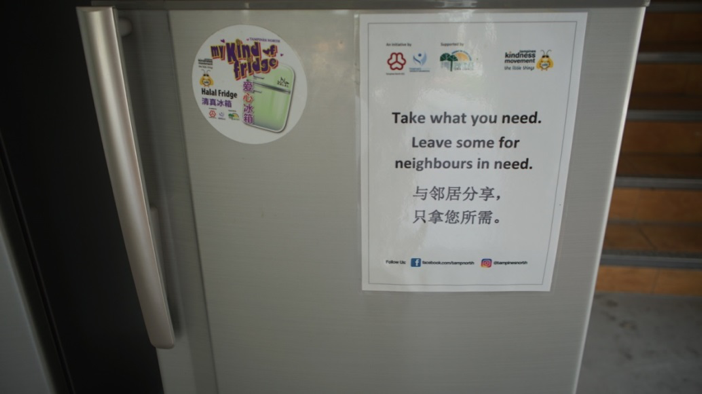 Finally, in the last discussion stream on “100 questions of food connections” Huiying Ng from Foodscape Collective spoke about different ways of identifying food as edible. Food edibility in Singapore is mostly commodity driven behaviour that leads to unnecessary food waste. Questions of how to find value in things we consider waste, what is perceived as edible, how weather conditions in Singapore affect food waste and whether technologies could be useful to reduce food waste were addressed. 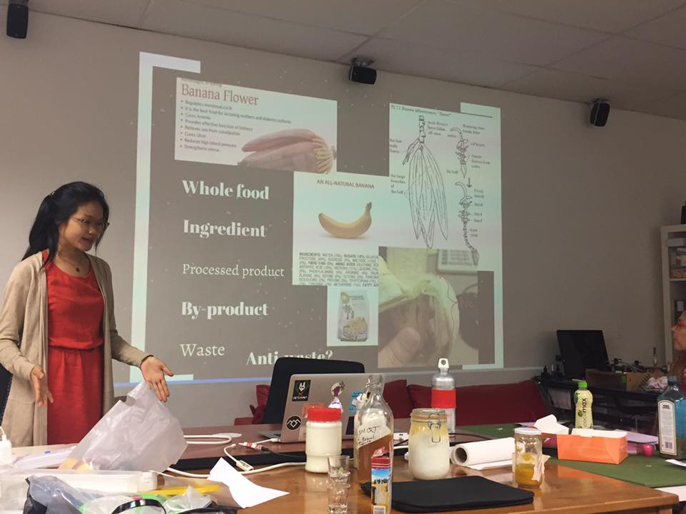 Once the presentations were over, the discussions with participants moved to the second part of the workshop that was focused on imaginative exercise of mapping food sharing in Singapore. Using a large format paper and a variety of colourful stickers and markers, our intention was to map food sharing through spaces that share food stuff but also facilitate and incubate knowledge-building and knowledge sharing around food sustainability in Singapore. With a basic map legend of shared spaces, edibles, skills and other that was inspired by SHARECITY 100 Database we drew a map of Singapore (we missed about 62 islands!). At first, we began to think of shared public spaces where food is produced, consumed, redistributed or wasted. Spaces such as community gardens, urban farms, communal kitchens, soup kitchens, community centres, food banks and composting sites emerged on our map. Consequently, we thought about private spaces that are shared with strangers, such as homes where meet ups and potlucks take place, self-organizing team project spaces where food is bartered, gifted and consumed, and sites of food waste and food rescue such as wet markets, food courts and supermarkets. We also included food sharing initiatives that cross private and public spaces such as food growing spaces within HDB residencies, universities open spaces where food is consumed and botanic garden with garden allotments. 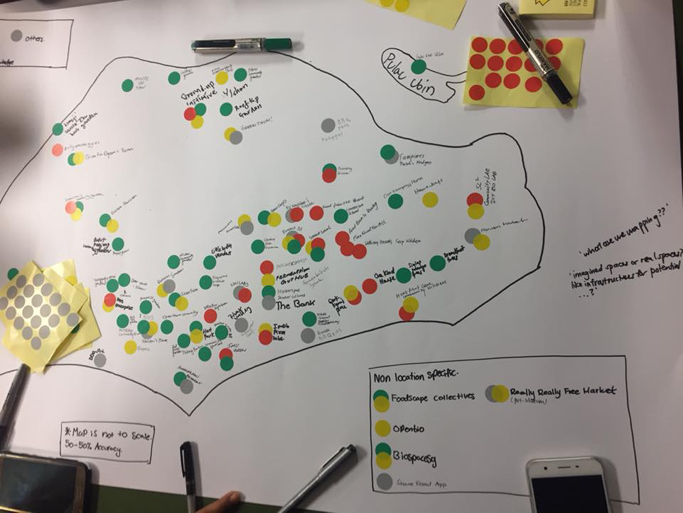 Through the multiple and colourful dots with some even overlapping, it became self-evident that that there are alternative ways of thinking about urban food systems. The central Singapore re-emerged to us through shared spaces for food production; In the South-East and North-East Singapore, we noticed a high density of food redistribution sites; and South-West Singapore proved to be a food sharing scarcity due to a number of incineration facilities in use and industries. Also, despite a narrative around land scarcity in Singapore we actually noticed that there are many spaces that could potentially become sites of food sharing. One of the participants suggested that barbecue stands are food sharing scapes used as shared cooking facilities.

The mapping activity was regularly interrupted by food sharing and tasting, culture starter swaps and conversations about home-made yogurt, kombucha brewing and DIY sake that provided educational surroundings for everyone interested in fermentation. 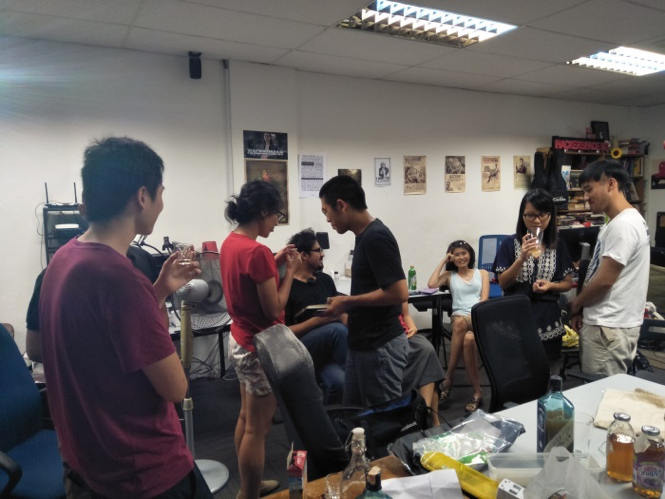 Concluding, the workshops offered an opportunity for all of us to reflect on collaborative mapping practices. It was fascinating to hear us discussing about different shades of sharing in Singapore and speculate about the reasons behind the emergence of food sharing patterns. Thanks to HackerspaceSG where DIY culture is a daily practice, and curiosity of the workshop participants, we gathered enough data to begin a discussion about what we wanted this map to be in the future and how we wanted to continue mapping food sharing around us. To disseminate our findings, we decided to digitalize information gathered and create an online google map. The map was termed with a unique name, “Unchope Makan”; the word “Chope” to Singaporeans means to reserve a place, for example a seat in a food court, sometimes by placing a packet of tissue paper on it, and the word “ Makan” that means food and has a local connotation that hints at food culture as an open source concept for food sharing in Singapore. The use of the term and the dissemination of the map is now meant to increase the awareness of food sharing and shared resources that could lead to more and more smart collaborations in the future. To visit UnChope Makan please click on the link. 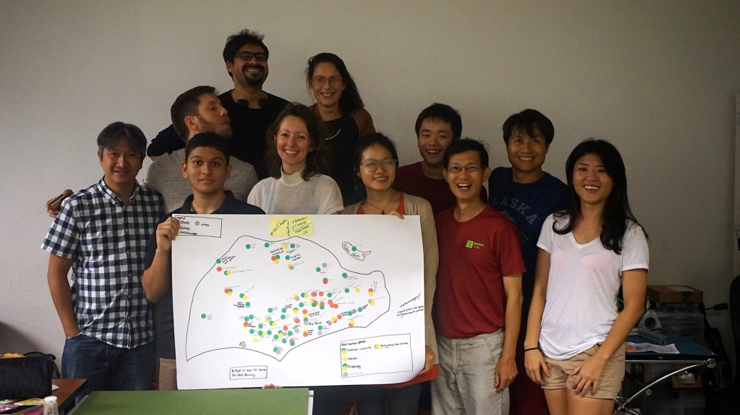