Published by Brigida Marovelli on the 20th February 2019. 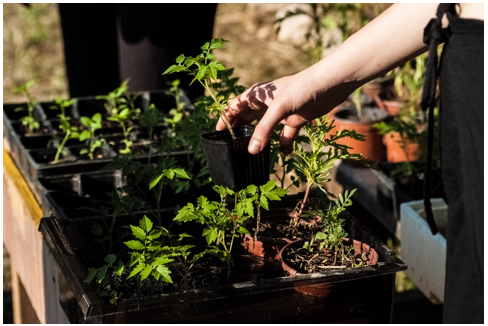 During my time at Sharecity, I had the pleasure to spend six months in Athens carrying on ethnographic research about food sharing. The four initiatives selected as case studies for this phase of SHARECITY’s research were: Boroume (Μπορούμε – We Can), a surplus food redistribution charity; Organisation Earth (Οργάνωση Γη), an environmental and educational food growing not-for-profit organisation; “O Allos Anthropos” (O Άλλος Άνθρωπος – the Other Human), an informal collective social kitchen; and Vizeat (now Eathwith), an international social dining platform.

I will never forget my first engagement with Boroume, as it was the very first day I landed in Athens. Springtime was in its full swing and almost everyone was busy getting ready for Easter, which can be considered the most important religious celebration in Greece. That day I joined the energetic Boroume’s coordinator, Anna, at a loud and chaotic local market. The ‘laiki agora’ (λαϊκή αγορά), literally translated as ‘people’s market’, occurs weekly in many of Athens neighbourhoods. Boroume collects surplus produce at the end of the market day in more than 10 markets and redistribute it to local charities. Far from being an easy task, the cheerful team of volunteers engaged with each vendor, explaining the project, clarifying the aims and reassuring that the surplus will be distributed to those in need. I witnessed the exact same zeal in every site of Boroume’s activities: farmers markets, gleaning, food growing, education in schools, fighting food poverty. Boroume’s approach embraces much broader challenges than just diverting edible food from landfill, by raising awareness around food waste, running international collaborations, participating in European research projects and by trying to respond positively to the limitations imposed by Greek bureaucracy.

To my great surprise I found Organization Earth, when looking for food growing spaces in a city that is visibly overbuilt. Indeed, the Centre of the Earth (Κέντρο της Γης), Organisation Earth’s lush and blossoming park and garden, hides behind a concrete block of commercial outlets. It is a 25,000 m2 park, located in the metropolitan area of Athens, where school children can learn about nature, food growing and sustainability. It is here that Organization Earth promotes its mission, raising environmental awareness and introducing children and citizens to sustainable practices through experiential approaches. The Sunday events are particularly popular: alongside workshops and activities for children, the Centre of the Earth is transformed in an open-air collective kitchen: visitors, mainly children and their families, chop and help preparing a meal that is then cooked and shared. Organisation Earth also focuses on farming training for people who are unemployed, education for sustainable businesses in sustainable food growing and for the blue economy, intended as the sustainable use of sea resources for economic growth. The initiative has a strong emphasis on solidarity that is reflected across all their programs, particularly in Earth Refugee, which provides a wide range of services for three refugee camps in Athens (health assistance, dental aid for children, language courses, sport practice, employment support).

Another initiative that has been on the frontline in helping newcomers to Athens is “O Allos Anthropos”.  O Allos Anthropos is an informal social kitchen, which engages in cooking and distributing free meals in public spaces. Since 2014 they also have a physical centre, where they provide services such as laundry and washing facilities, food and goods distribution. Spending time on the street with Kostas, Allos Anthropos’ charismatic leader, and the rest of the crew, I realised that most of the volunteers now involved in the meal preparation had previously been on the receiving end. As the one-pot meal Allos Anthropos provides is cooked directly on the street, they transform public spaces into collective kitchens, creating a festive atmosphere around the meal. Indeed, every Tuesday the widow of a popular Greek singer celebrates her husband memory, offering a meal in Monastiraki Square, the very heart of the Athens. As Kostas tirelessly reiterates, the social kitchen does not only deliver food, it offers love to fellow humans.

Across many different locations in Athens, I also joined enthusiastic chefs who hosted dinners at their homes via VizEat, a social dining platform that merged with EatWith in 2017. The international guests I met at the dinner parties were looking for authenticity and originality, searching something out of the mainstream dining options available in Athens. They also expressed the desire to see the place through the eyes of local people and have access to the way they live, how they cook and how they share a meal. These dining experiences became a journey into the rich gastronomic traditions of Greece, but they also provided an occasion of reflection on the relationship between the city, tourism and its food culture. Each host disclosed childhood memories, grandmas’ recipes and their personal home space with me and the other VizEat guests. The platform also offered the chance to share the hosts’ passion for food without setting up a commercial activity. Most hosts desire to work independently in hospitality: they would like to open restaurants or cafes, connect neighbours in food community projects or building their own app to connect Athenians around food. Nevertheless, anxiety was expressed around the potential issues that such platforms raise around responsibility for food safety and taxation, since these areas are not fully regulated by Greek legislation.

My fieldwork confirmed that Athens’s food sharing landscape is characterised by the proliferation of informal initiatives, as previously indicated in the SHARECITY100 database of urban food sharing initiatives. Athen’s civil society is responding to the humanitarian refugee emergency and to the financial crisis of the late 2000’s and that is still affecting Greece in 2019.

The list of people to thank is endless, but I would like to say thank you to my case studies: Boroume, Organisation Earth, O Allos Anthropos, and VizEat hosts and guests. I would also like to thank the Department of Anthropology at Panteion University, where I was based as Honorary Visiting Fellow; Despina and Eleni, for their precious assistance; Eleni Myrivili , Deputy Mayor of Urban Nature, and the Resilient Athens office at Municipality of Athens; Amalia Zepou, Vice Mayor for Civil Society and Innovation, Municipality of Athens, and the SynAthina project; Niki Charalampopoulou, Feedback former director, who helped me in the early stage of the research to identify my case studies; and Greek friends and strangers, who facilitated my fieldwork in countless ways.

Share This:
« The urban governance of food sharing. Present and future
Happy Spring Time from SHARECITY! »