Published by Ferne Edwards on the 5th July 2016. 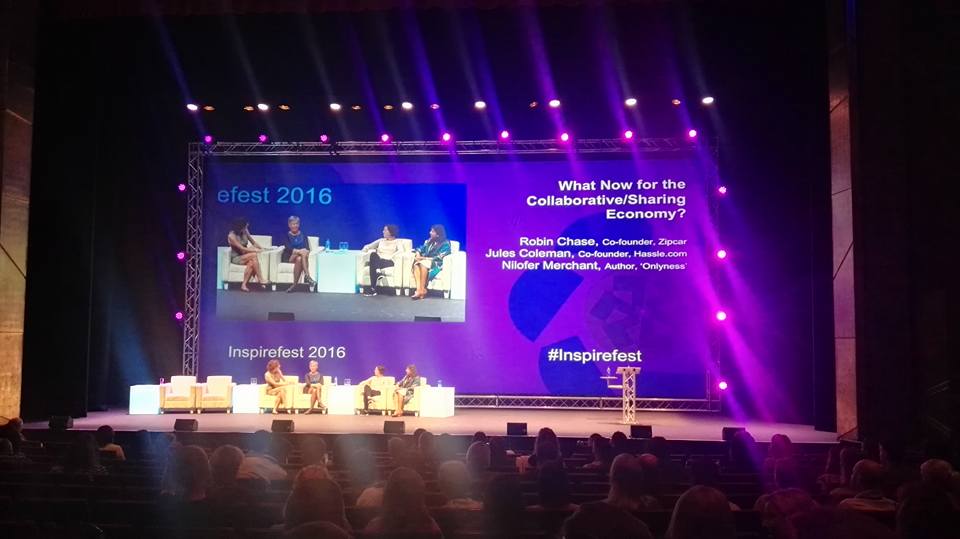 Day 2 at Inspirefest presented a lively discussion on the collaborative economy and design thinking. Robin Chase, Co-founder of Zipcar and author of ‘Peer Inc’, opened the discussion with an educative slideshow outlining the need for innovative approaches that require moving away from industrial capitalism in order to meet the challenges of climate change and other future concerns.

Robin explained how “we are moving to a new way of getting value” that is more resource and cost efficient by appreciating ‘excess capacity’, defined as things that already exist, are paid for, and that contain more value. The diversity of material goods and services on offer are coupled by the diversity of participants who work peer-to-peer, embracing qualities of innovation, resilience and redundancy. Multiple platforms enable participants to connect with the potential for high growth by enacting an economies of scale that is accessible by individuals. Robin believes Peers Inc delivers three miracles:

#1. We can defy the laws of physics (with the platform organising and unleashing excess capacity while peers co-invest with existing assets);
#2. We can tap exponential learning (with hundreds of thousands of simultaneous peer experiments, while the platform analyses, learns and shares best practice); and,
#3. The right person will appear (with a platform of supercomputing and peer learning with real time adaptation of peers at the edges).

She completed her slides with the question: “Do you think existing approaches are going to adapt quickly enough to deal with climate change?” To ask, “Do we need revolution or evolution to deal with such changes?” Her reply: “We need to pursue a gentler way that matches the speed of pace of evolution with the outcomes of revolution”. For more information, see Robin’s book, “Power Inc”.

Robin’s presentation evolved into a panel discussion welcoming to the stage Jules Coleman, Co-founder, Hassle.com, and Nilofer Merchant, Author, ‘Onlyness’. Questions included: Have we reached our peak for on demand sharing economy? To which the over-riding response was a resounding ‘no!’. In fact, the panelists believe we are only at the tip of potential for the sharing economy where “everything that can become a platform, will become a platform” (Robin Chase). Panelists discussed some of the learning hurdles in this new field, where not only are approaches to business are changing, but so too are traditional concepts evolving. For example, on the topic of driverless cars, people asked, “Why would I want to learn to drive when technology can do it for me?”. Panelists also re-introduced the theme of women in technology and the new perspectives and directions a gender balance could achieve. Nilofer’s book, ‘Onlyness’ also broke into new territories of thought to explore value-shift by considering how a vast proportion of the population are doing under-utilized work. What if instead the government provided a basic income to release people from underutilised roles to provide a platform of participation where people could truly engage? This panel, as is the concept of collaborative economy itself, was more revolutionary than evolutionary, questioning the rules and pushing fuzzy boundaries of work, technology and gender in new directions. 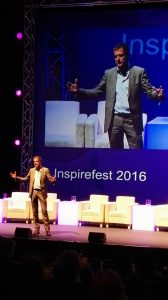 The next session presented keynote presentations on ‘Leading through Design Thinking’ by Alan Siegel, President and CEO, Siegelvision, Mark Curtis, Founder of Fjord, and Lorna Ross, Director of Design, Mayo Clinic. Siegel brought home the topic of branding, reminding the audience of the importance of simplicity to emphasize, clarify and distill the key message. Curtis simply stated “we design innovation” with his work at Fjord, revealing an interest in the technology potential of hotel doors, where “we are seeing the digitization of absolutely everything” as we move into a third era of living services that is significantly different to the flat, static experience of before. Lorna spoke of an amazing career that journeyed from fashion, to the Department of Defense, to her current role in healthcare. Each of these twists and turns delivered fascinating insights that include that “innovation is not always about things getting better” with respect to world events, with designers not being native to traditional sectors “having to work in from the edges”, while people from the mix of worlds between military and healthcare “have extreme and extraordinary needs”. The panel to follow, ‘Designing Human-centric Products and Services for the 21st Century’ welcomed Lara Hanlon, Designer from IBM Studios and founder of éntomo, an education platform and brand that encourages people to explore insects as an exciting, nutritious and sustainable food source for the twenty-first century. Together, the panelists discussed the challenge of fully engaging with data – “data is just another material to be taken back to design principles” (Lorna); the links between innovation and design, to ask, if you have innnovative without design, what happens?; that people will collaborate in spite of tools rather than because of them; and the various trade-offs that occur as technology and design becomes further embedded into our lives. Again, the possibilities are immense, as captured by Mark’s statement; “We’re in the process of mapping another dimension onto the planet”. His statement was driven up a notch again by Lorna, who said; “We know we’ve tipped into being virtual beings”. 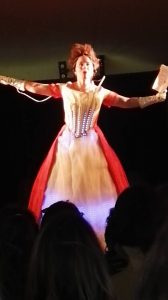 This session, and in fact the entire conference that drove such exhilarating thoughts, could be no better completed than by Zoe Philpott’s performance of ‘Ada Ada Ada’ at Inspirefest Fringe. Zoe who also gave Inspirefest’s first presentation, performed a one-person theatre piece that combined person and technology as she wore a 4,400 interactive LED dress operated by programmable gloves made in collaboration with founder of Hackspace London, Charles Yarnold. Her depiction of Ada Lovelace, the developer of the first complex computer programme in 1843 – and a woman! – presented a captivating insight of a past world and culture that has laid the basis of technology today. Zoe’s performance reinstates Ada’s rightful place in history, coincidently bringing together many aspects that Inspirefest itself delivered – issues of culture, technology, design and gender that must be united to meet challenges both today and into the future as we question what boundaries to push, how hard, and the impacts they may have.

Share This:
« SHARECITY at Inspirefest 2016
Co-creation models and Sharing in Seoul and Berlin »