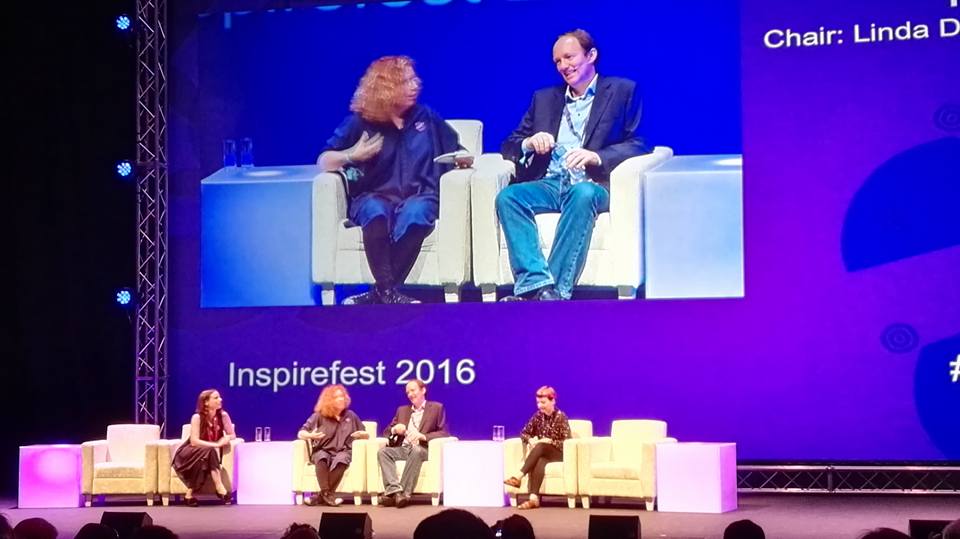 Inspirefest kicked off to a bright start this year in Dublin! A festival of technology, science, design and the arts, the two-day conference excels in providing a diverse range of entertaining, intelligent and edge-cutting presenters who cover topics ranging from gaming, to education, to product and service design, to the future of work, to happiness! For the SHARECITY team, who were welcomed as bloggers for the event, the conference spoke strongly to our interests of arts and technology, change and social media, collaborative economy, and future leaders. 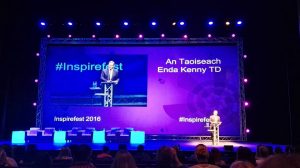 Ferne attended Day One which began with a warm welcome by Founder of Inspirefest, Ann O’Dea, and Ireland’s Prime Minister, An Taoiseach Enda Kenny, TD. Kenny reminded the audience of the crucial importance of inspiration that is essential to attend to future challenges. He stressed the need to question our beliefs and assumptions in how we look at the world and emphasised the value of innovative ideas, cultural diversity, and the crucial role that science plays towards achieving a positive future. Ann O’Dea introduced the conference goals, acknowledging the richness of the broad community that exists around the conference itself and her desire for the conversations started here to reach far and wide beyond the brief presentations to last year-long. Notably, O’Dea recognised the issue of gender imbalances within STEM which have been addressed at Inspirefest with roughly 70 per cent of the presentations by women. Along with the mixed-style formats of individual presentations, to dancing children, panel discussions, one-on-one interviews and intimate storytelling, the pace, depth and engagement of each session is, indeed, informative, entertaining and inspiring. 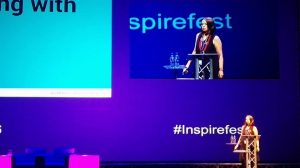 The first session, ‘Full Steam Ahead’ included two presentations by Zoe Philpott, Interactive Storyteller and producer of ‘Ada.Ada.Ada’ and Noel Murphy, IoT/ Wearable Design Leader, Intel. Zoe traced the development of her career through the loops of philosophy, coding, marketing and design. With an extremely impressive suite of projects that combine technology with art and theatre, her work portfolio includes virtual science games at schools and museums, to dancing robots, and working with people who make clouds in rooms. Noting the lack of acknowledgement of women in science or even of women statues on city streets, she has created ‘Ada.Ada.Ada’, a live performance that tells the story of Ada Lovelace who invented the first complex computer programme in 1843.

Noel likewise works between the interfaces of technology, music and performance. In his role as wearable design leader at Intel, he tells us that “its all about shrinking the technology. Making it disappear into your clothes, into your environment”. Together, Zoe and Noel were later joined on stage by Linda Doyle from Trinity College Dublin as compere, and Nora O’Murchu from the Interactive Design Centre at Limmerick University, to discuss the transition from STEM (Science, Technology, Engineering and Math) to STEAM (add ARTS). Their closing comments: the need for artists to take control of technology and hence engage with it more by developing their ability to understand how it works (Noel); to be aware of when art becomes decoration in STEAM and to include critical thinking so this doesn’t happen (Nora); and to start young – to let children play across camps of science and arts rather than saying its one or the other (Zoe).

Sessions to follow included the ‘Future of Gaming’ with a fascinating presentation by Brenda Romero, Award-Winning Game Designer and Co-Owner of Romero Games, on the role of women in games, challenging perceptions of who plays (43 year old women are the highest), the number of women characters in games (the 1st 2 google search pages show none), and the female roles that are on offer that are challenging in themselves! Another session on ‘Change through the Power of Social Media’ delivered three short presentations – Lian Bell, Waking the Feminists; Sinead Burke, Blogger, Activist and Researcher; and Sue Black, author of ‘Saving Bletchley Park’. Social media here was used alternatively as a means to connect, to educate, to motivate, to re-focus the message beyond sensationalism, and to unite, with all presenters creating change through interaction between community and technology. 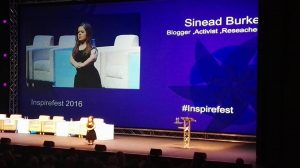 For SHARECITY, this event highlights the creativity, versatility and adaptability that can exist in projects uniting social need and ICT towards urban sustainability. Art, music and theatre introduce a freshness of thought and colour that appeal to a broad audience and approach. Inspirefest also highlights the value of gender balances in projects and illustrates the need for gender to be considered within both STEM and STEAM. Off to an excellent start, I highly recommend Inspirefest for all, which also includes evening and weekend events as part of Inspirefest Fringe. Held in Merrion Square Park East, Inspirefringe features live music, spoken word, international theatre premiers, art exhibitions, family coding workshops and much more.