Published by SHARECITY on the 23rd November 2016. 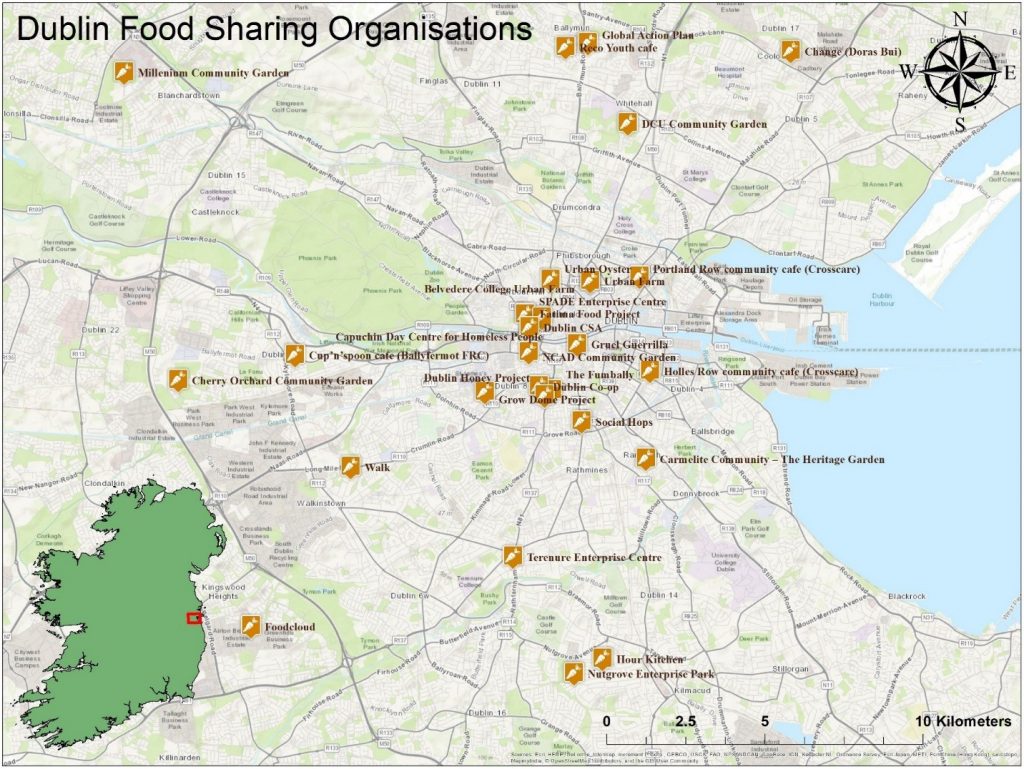 Having worked as a Chef for 8 years prior to returning to academia to complete an MA degree in Geography and Politics and an MSc in Environmental Sciences, focusing on food sustainability for my thesis was always something I had in mind. Learning about the research being undertaken by SHARECITY I was inspired to contribute to the exploration of the urban food sharing phenomena and the question of how greater sustainability within the world’s urban environments can be achieved.

Background research for my project highlighted the extent to which the global food system is in need of a dramatic shift away from unsustainable practices. With over half of the global population residing in cities, and with global population and urbanization both rapidly increasing, increasing the efficiency of cities in terms of how their food is produced, distributed and consumed is paramount to achieving greater sustainability of the global food system.

Due to its multi-dimensional potential in terms of providing economic, environmental and social benefits, urban food sharing provided me with a comprehensive and dynamic research topic for exploring a potential solution to increasing food sustainability within the world’s cities. The first step of my research was to geo-locate the Dublin based food sharing initiatives identified in the SHARECITY100 Database using Geographic Information Systems (GIS).

Using the categories established in SHARECITY100 Database the enterprises could be plotted in layers representing the types of food sharing taking place, visually illustrating the diversity of food sharing in Dublin. 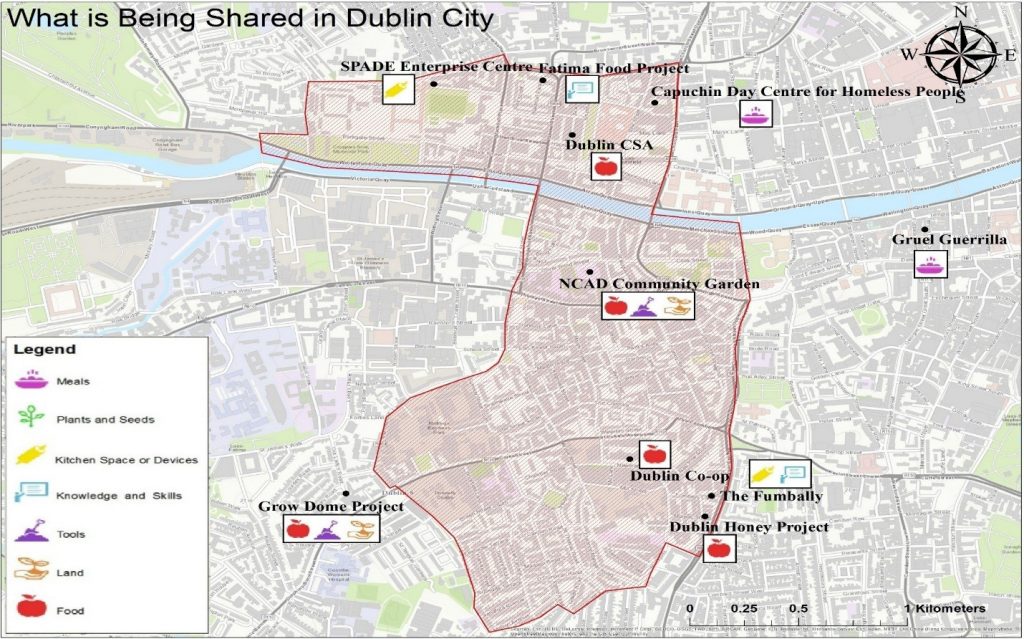 The process of geo-locating food sharing in Dublin was made difficult due to the very nature of many of these enterprises. For example, several initiatives do not have physical bases in Dublin, including supper clubs which put on events in a variety of locations, or foraging websites which provide extensive interactive maps of wild food trails across the city. These activities could not be located as points on the maps produced for this research, such is the novel impact of the ‘I’ in ifood sharing.

Incorporating socio-economic data from the Central Statistics Office into GIS enabled the relationship between the food sharing initiatives and the socio-economic characteristics of their locations to be investigated. It became apparent that the areas of Dublin with slightly above average socio-economic deprivation were the most active in terms of food sharing. These findings correlate with previous studies which suggest that grassroots initiatives, similar to the food sharing initiatives being researched, are most likely to evolve in areas where socio-economic deprivation is prevalent enough to inspire pragmatism, but not to the extent that the required skills and means needed to establish an organisation are inhibited (Davies and Mullins, 2011). Unsurprisingly, slightly more deprived areas saw greater food sharing activities led by charitable initiatives which gift food, whereas less deprived electoral districts were found to be home to more commercially- or lifestyle-oriented food sharing such as urban honey production and fermentation workshops. 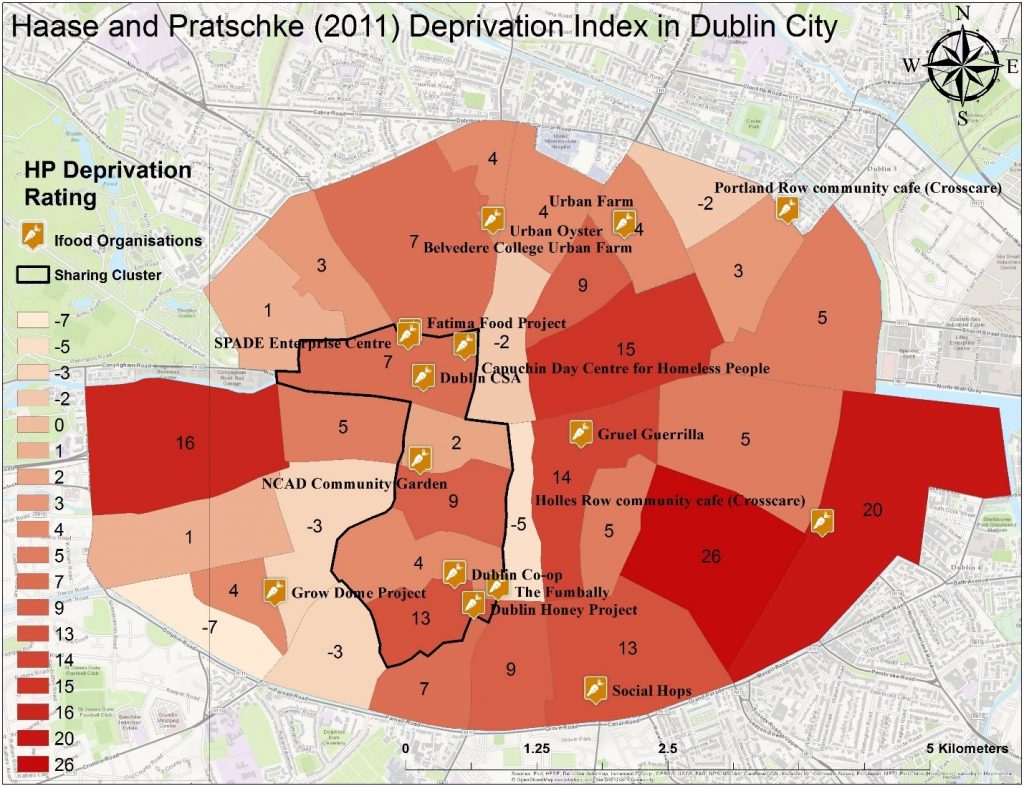 The four initiatives collaborating in this research were:

Collaborating with these four initiatives helped to illustrate the multitude of benefits to society, the environment and the local economy that can be achieved through food sharing within cities. Although modest in size, these initiatives showcase ways to grow food in cities all year round and in areas of limited space, to create a sense of community around a similar interest in urban agriculture, and to be more resourceful with food waste to name but a few.

Common Ground (http://commongroundbray.com/), another organisation involved in urban food sharing located in Bray, Co. Wicklow also contributed to the consideration of factors that will determine the potential effectiveness of urban food sharing in establishing a more sustainable food system in Dublin. There was a general consensus on the importance of implementing food sharing into the education system as a means of increasing food sustainability consciousness and incorporating it into our broader culture.

A SWOT (strengths, weaknesses, opportunities and threats) analysis was undertaken with each organisation to facilitate self-assessment in relation to the sustainability of their activities. Undertaking the SWOT analysis helped them to reflect on their most successful approaches, thereby highlighting areas of performance that could potentially be measured through the creation of a toolkit, as well as helping to identify areas where improvements could be made and foresee any external opportunities and threats.

The case study initiatives explained the many ways in which the process of creating these toolkits was beneficial for them. They found that working with a researcher to evaluate their initiatives objectively and identify the extensive benefits offered through food sharing activities helped to revitalize their passion and ambition. The initiatives also felt that the toolkits would be useful in terms of tracking progress and ensuring they continue in a trajectory which correlates with their objectives. Obtaining data on their performances provided a sense of achievement and pride for those involved, and would aid them in the pursuit of support and funding applications. All four initiatives expressed that the toolkits would be useful in the future and would provide a valuable means of promoting the fruits of their labour through social media and advocating the extensive suite of benefits that urban food sharing offers.

I would like to thank the following for their collaboration and enthusiasm throughout my research and I wish them all the best for the future:

You can read the full results of Ben’s research here.