Published by Monika Rut on the 2nd November 2016. 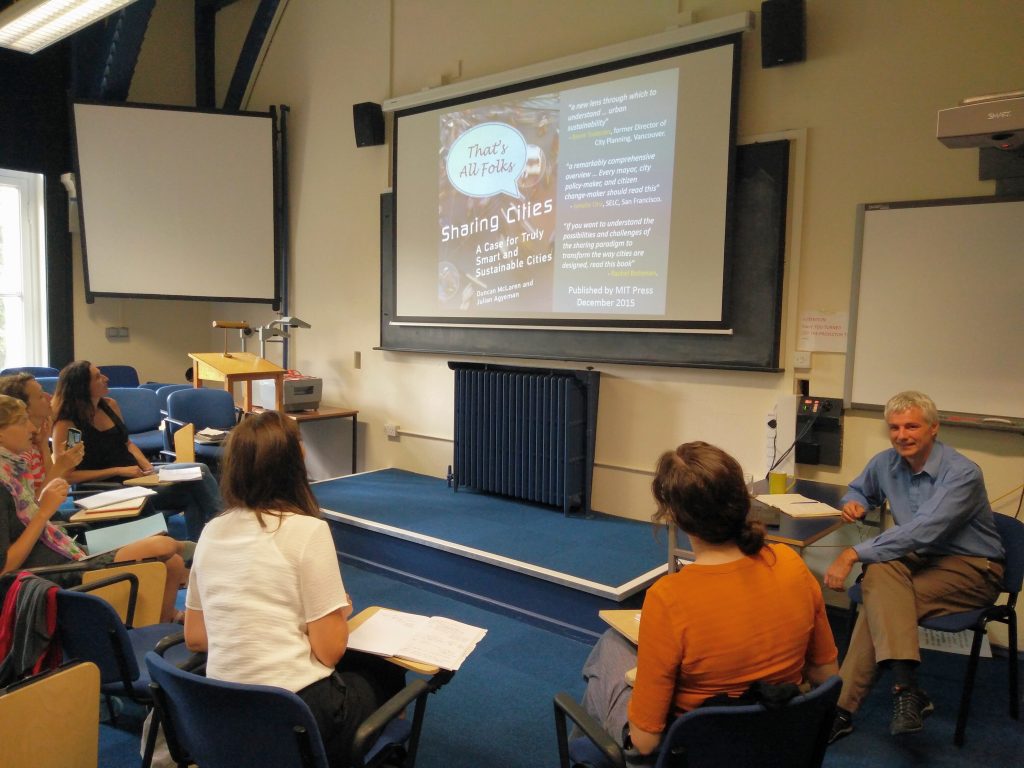 During our last Sharing Lab, Duncan McLaren, co-author of the book Sharing Cities: A Case for Truly Smart and Sustainable Cities, came to talk to the SHARECITY team about the ever-changing landscape of sharing in global cities, highlighting the socio-cultural and technological potential of the sharing economy, as well as its challenges and promises. Duncan guided us through some characteristics of ‘sharing’, which are important to take into consideration when looking at the sharing economy, raising, many questions around the definition of sharing, its categorizations, and its cultural contingencies and stimulating a thought provoking discussion. Duncan stressed that sharing is a universal human behavior incorporated into the very nature of cities, the historical hubs of trades and exchanges. Sharing is indeed an economic, cultural and political phenomenon, and each of these aspects need to be addressed when investigating its complexity.

As one of SHARECITY’s objectives is to understand the emerging forms of food sharing economies, it was essential for the researchers to learn how the paradigm of sharing is evolving through the economic, cultural and social tissues of cities and what its role in fostering sustainable futures is. Duncan pointed out that sharing should be looked at from a more holistic perspective, where its scope includes not only the physical act of exchange, but addresses its transformative potential. Sharing has the ability to simultaneously create social change on the city level by extending the circles of sharers to individuals, groups, citizens and city mayors, and by cultivating the spirit of social innovation and social entrepreneurship.

Furthermore, Duncan offered his views on the transition process from communal to commercial sharing, and how intermediaries and online platforms allow an increase in sharing among strangers, building wide and cosmopolitan networks of comparatively weak ties. On the one hand, sharing can be seen through the lenses of the socio-cultural context, deeply rooted within homogeneous communities and narrow networks of strong ties; on the other hand, the rise of intermediaries that leads to commercial sharing, brings our attention to the growth of individualism and neo-liberalism, and its impact on gentrification and work precaritisation.

Discussing this transition shed light on the contemporary sharing paradigm. This attempt to map the landscape of sharing could be considered a starting point for a deeper analysis of purpose, motivation and nature of sharing on the local and global scale. However, it would be impossible to embark on a discussion concerning  the transition process from communal to commercial without addressing the blurred margins of sharing practices.

During the construction of the SHARECITY100 database, we carefully considered each of the 4000 plus enterprises which were to be included. Duncan, however, encouraged us to discuss and focus on the principles that guided our categorization, consequently helping us to reflect on the principles behind sharing. This constituted a valuable starting point for the next stage of research, in which the SHARECITY team will carry out ethnographic research in 11 cities in the world. Duncan also highlighted the cultural contingencies and contrasting geographies of sharing, by providing engaging examples from San Francisco, Seoul, Amsterdam, Medellin, and Copenhagen.

Share This:
« City Growers: Forsaken Lots to Productive Plots
Paradoxes of exclusivity and openness in food co-ops, sharing economy and ethics of consumption »