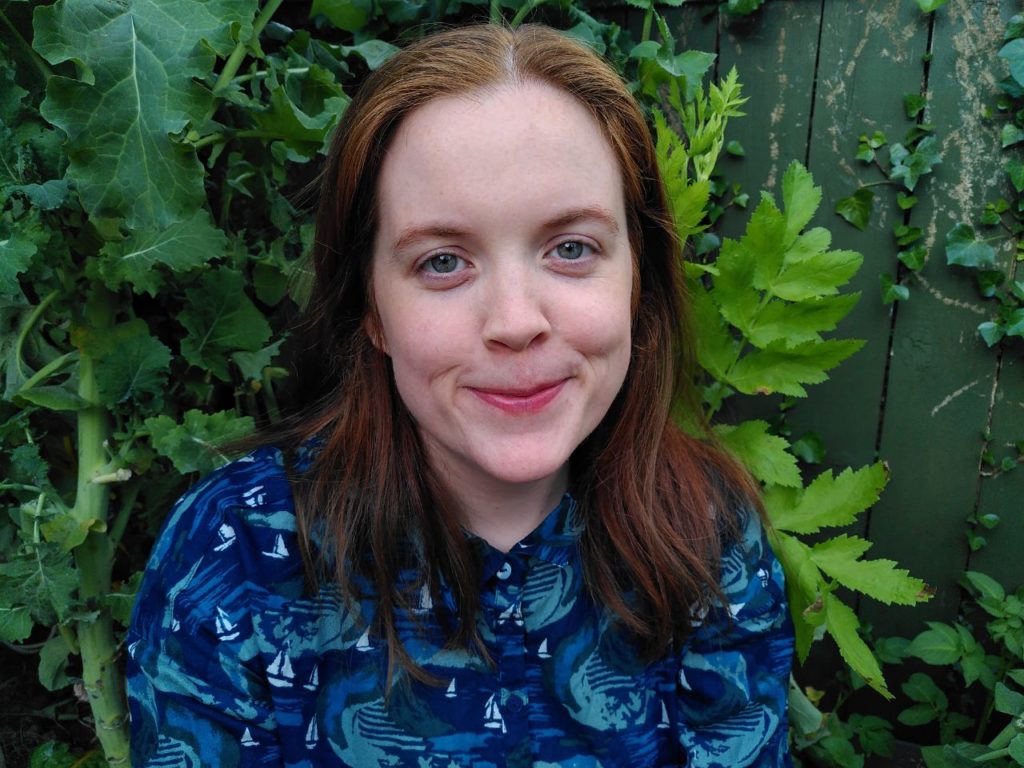 Hello everyone! My name is Louise Michelle Fitzgerald, and I have recently joined the SHARECITY Research Project as a Post-Doctoral Researcher. I am really glad to support the work of SHARECITY, in exploring and hopefully enabling food sharing initiatives in our urban environments. I passionately believe that building resilient and sustainable food systems is of critical importance to address our climate and environmental challenges. Food sharing initiatives can also help address social justice and access issues around food, through redistribution, and providing spaces to grow and share food together.

My passion for food issues began while I was living in Berlin, Germany, where I spent 3 years working and researching in environmental and civil society organisations. I’ve lived in urban environments all my life and have experienced first-hand how disconnected this can make us from the processes of where our food comes from, how we access it, and how we experience it. In Berlin however, I began to see how food sharing can help address this disconnect, both from our food and also from those living nearby us, in often-times impersonal cities.

It was in Berlin that I first learned of the model of Community Supported Agriculture (CSA). CSA is where groups of people pay a monthly fee directly to farmers and get fresh produce delivered weekly in return. CSA is about building relationships of solidarity with farmers. The group recognises the value the farmer is creating in providing healthy, organic food. This helps overcome the precarity that many farmers face within the current food system. 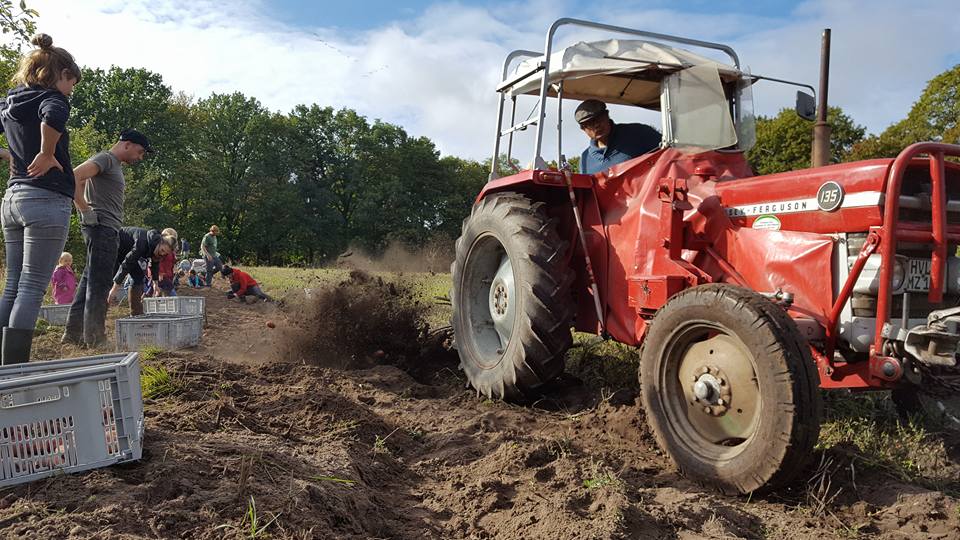 “SpeiseGut” is just one of several Berlin based examples of Community Supported Agriculture.

Even if there is a poor harvest of one vegetable crop, the farmer’s livelihood isn’t affected as they still receive a wage from the membership contributions. The vegetable boxes are also made up of seasonally available fruit and vegetables, so it helps to reduce food miles, and reconnect people to the natural cycles of the land. It also helps connect people directly to their food through providing opportunities to volunteer at the farms.

On the social side, it also builds trust, as there are designated pick up spots for members to independently collect the fruit and vegetables. It is up to people themselves to weigh the food and take their set portion away – so it’s also building solidarity amongst group members ensuring everyone only takes their fair share (even when something extra special like fresh cherries are there)! I was a member of a few of these excellent CSAs when living in Berlin, as well as living in a flat that served as the meeting and collection point of the local neighbourhood CSA group – it was an exciting experience to be a part of. 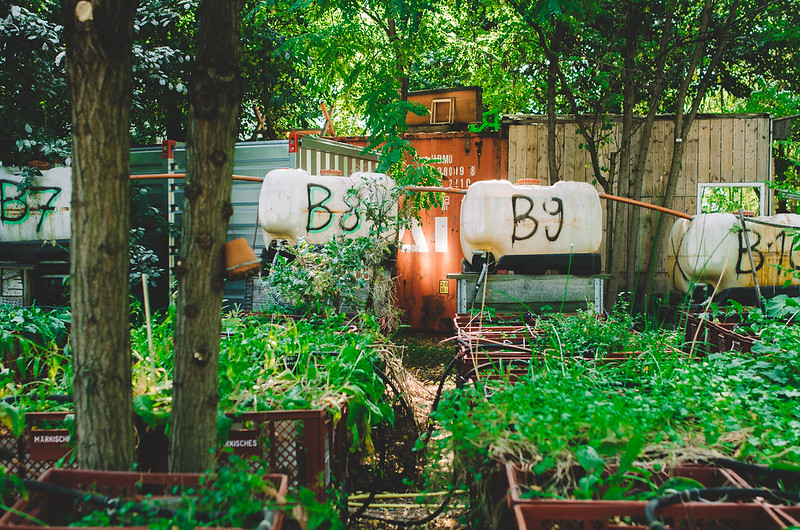 A community garden – “Prinzessinnengarten” – in Kreuzberg, Berlin. This translates to “Princess Garden” in English.

Berlin also has many community gardens and unique spaces for food sharing. I was lucky to experience a number of these during my time in Berlin. I lived nearby Trial & Error, an experimental space where people can swap clothes, and borrow community owned tools and a community owned cargo bike!

I also spent a lot of time at the community garden “Prinzessinnengarten” in Kreuzberg, Berlin. The space on which the garden was set up was once the site of a shopping centre that was bombed during World War II. The site was largely neglected until the garden was created. Due to the mix of rubble and concrete on site, the ground wasn’t suitable for growing and producing vegetables, so instead, they planted crops in boxes and containers. This also serves the function of making the garden mobile, as security of spaces for urban growing is an ongoing issue in the city.

The garden connects people to food and nature in the city through regular volunteering, events to grow and harvest, and through offering garden produce at the garden cafe. This takes the form of diverse seasonal hot meals or “Wurzel Saftschorle” a juice made from root vegetables harvested from the garden. Sitting under the cool shade of the trees in the garden and watching the bees fly from the garden rooftop beehives, provides an important place of solace for many in the city of Berlin. When seen from above, the nature of “Prinzessinnengarten” as a green oasis amidst the city grey is thrown into high relief. 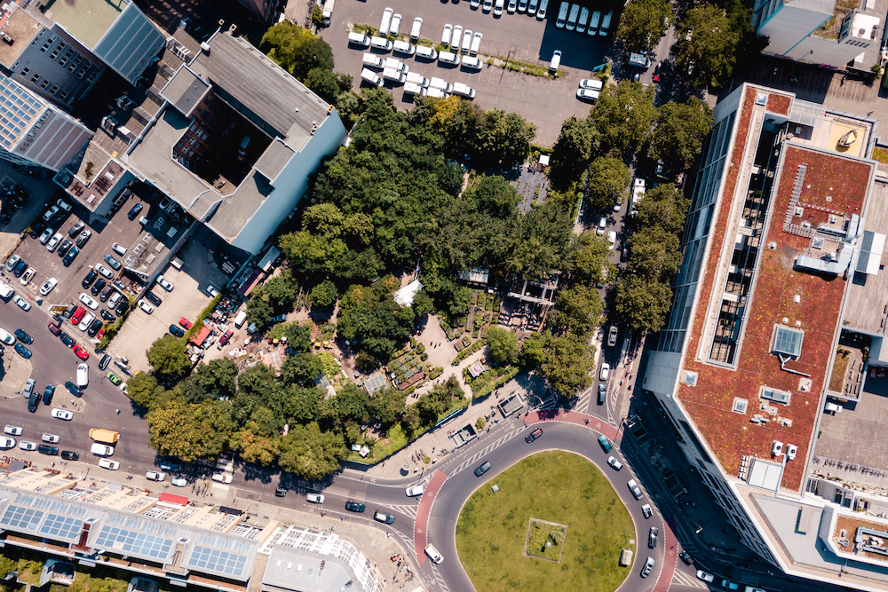 “Prinzessinnengarten” as viewed from above – note the expanse of greenery in amongst the concrete and buildings of inner Berlin.

During my time in Berlin, I also witnessed how food sharing served as spaces for different cultures to exchange, to experiment, and to collectively organise against processes such as gentrification in the city. As well as growing solutions, there is a strong proactive movement against the problematic aspects of the ‘Agro-food system’ in Germany. One of the largest representations of this is the annual “Wir Haben Es satt!” or “We are fed up!” protest, to highlight the social and environmental impacts of intensive industrial farming practices in Germany.

Ahead of this annual demonstration, there is a huge collective “Schnippeldisko”, translated as “Chopping Disco” – to prepare warm stews and meals for the thousands of activists. The disco concept was started by the Slow Food Youth Movement in Berlin in 2012, as a “culinary protest against the senseless waste of food”, and now takes place worldwide. In order to problematise that a third of all food is wasted worldwide, the discos save ‘wonky’ or ‘ugly’ vegetables, and prepare meals from them in a fun and engaging way – with over 2.5 tonnes of vegetables processed ahead of the 2015 demonstration alone. 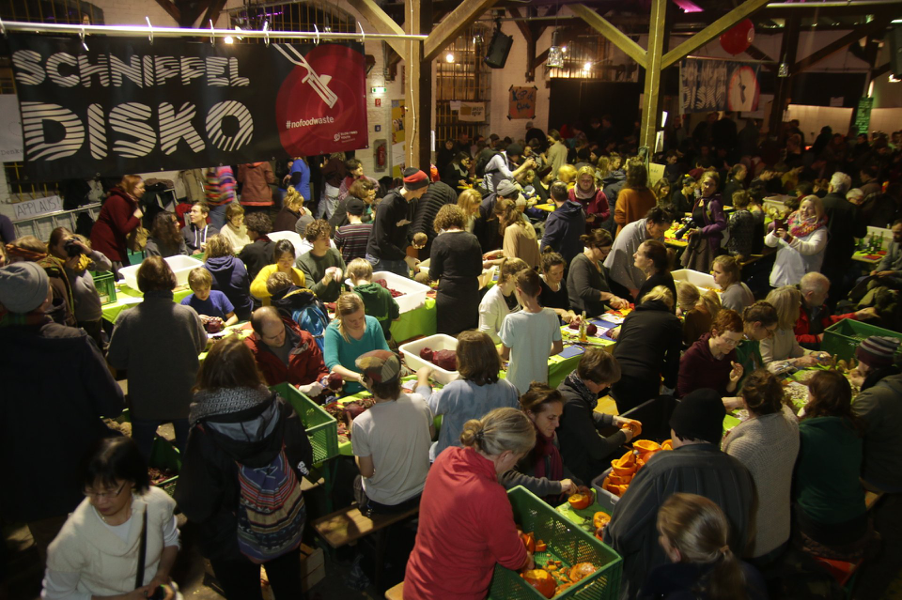 Typical annual scenes from “Schnippeldisko” or “the Chopping Disco” in Berlin, Germany.

Walking into the barn sized room filled with music and hundreds of people in self-organised chopping lines preparing literally tonnes of warm nourishing meals for the movement – was one of the most powerful scenes of sustainability and caring in action I have ever seen.

I witnessed similar scenes at the ‘Climate Camps’ I attended in the coal mining regions of Germany. From a group of people coming together to build a wind turbine for the camp in a couple of days, to the daily pitching-in of hundreds of camp members to cut vegetables for the cooks, who prepared meals three times a day for thousands of people in the make-shift camp kitchen. The meals were so large that a ladle the size of a Boat Oar had to be used to stir the pots.

One day whilst queuing for lunch, we saw an enormous pumpkin (that took three people to carry) on display in front of the kitchen with the message “for the resistance”. It had been gifted by one the local residents whose home was under threat from the expanding open pit coal mine that the camp was seeking to bring attention to. The resident had brought it from their garden as a gesture to thank all those who were at the camp standing in solidarity with the plight of the villages nearby who were at risk or had already been forcibly displaced due to coal mining. Through all these experiences, I began to understand how food formed an important ground for cultivating solidarity and sustaining our movements for environmental and social justice. 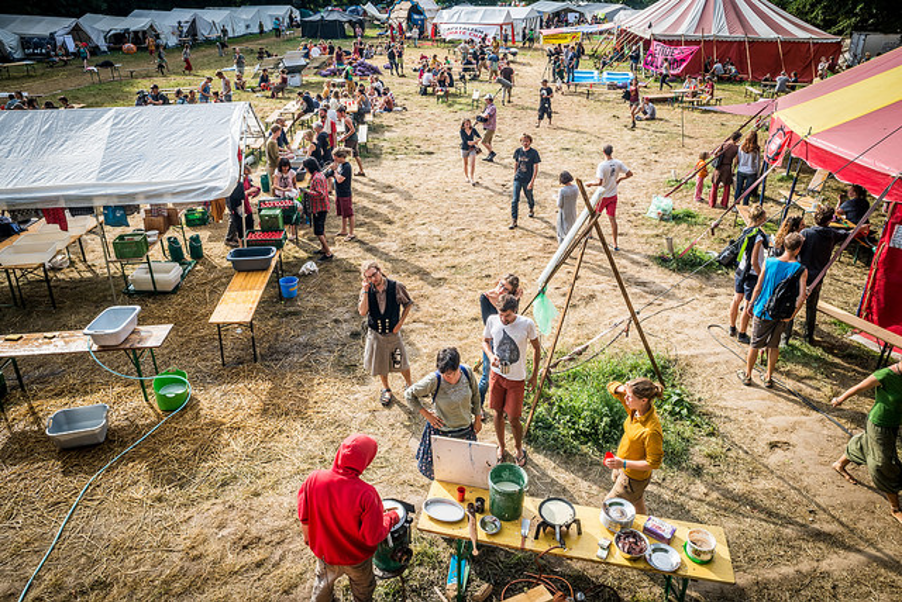 I was so inspired by all the examples of food sharing that I had experienced during my time in Berlin and Germany that when I returned to Ireland to start my PhD at the School of Politics and International Relations at University College Dublin (UCD), I began to seek out the food movement in Dublin, Ireland.

This brought me into contact with great initiatives like Foodture, Moyhill Farm, and Talamh Beo. The food sovereignty movement, and food justice politics more generally, aligned well with other environmental justice work I’d been involved in, such as the Fossil Free Divestment movement. Importantly, food sharing offers positive solutions that people can get involved in – in a practical way – to build personal and collective resilience as we transition our societies towards the future.

I wanted to contribute to food sharing, but like many, I found myself without the practical knowledge or skills to do so. For this reason, I undertook a 2 week long Permaculture Design Certificate Course at Carraig Dulra in Wicklow, Ireland. From wonderful people like Joanna Butler of OURganic Gardens, I learnt the simple yet transformational act of how to sow seeds. In order to practice these skills further, I started growing my own vegetables last year. I’ve also secured some small funding to undertake a food growing project in my local area.

Whilst I build these practical growing skills, I am so grateful to be able to contribute my well-practised research skills to SHARECITY’s work in my new Post-Doctoral Research Role investigating the future of urban food sharing at SHARECITY. As my research background is in political science, I’m particularly interested in political ecology perspectives, focusing on dimensions of power, accessibility, and justice in sustainability transitions. My work with SHARECITY will focus on developing scenarios for future sustainable food sharing. Overall, I will contribute to collating the diverse and in-depth findings of SHARECITY’s research, in the hope of supporting future food sharing.

I very much look forward to this exciting final phase of SHARECITY!