Published by Oona Morrow on the 31st October 2017. 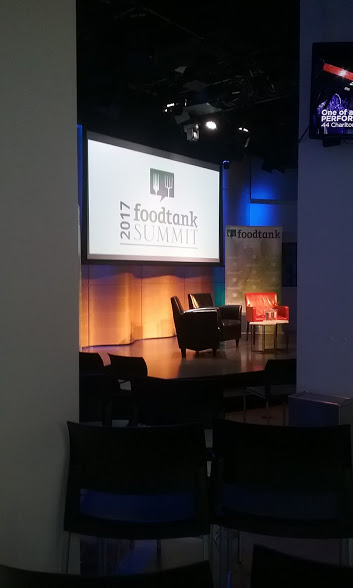 Last month I participated in the Food Tank summit “Focusing on Food Loss and Food Waste” in New York City. This was the first ever Food Tank summit dedicated to Food Waste. It attracted participants and online viewers from around the world, and had a wait list of more than 1,400 people. If this isn’t an indicator of public interest in food waste, I don’t know what is. 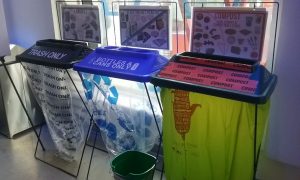 I participated as a volunteer, doing one of my favourite things – sorting through food waste and trash. And I got to spend the day with Meredith from Common Ground Compost. This woman owned business provides organics brokering services, training and technical assistance, and sorting services for Zero Waste events. Meredith and Laura are also movers and shakers in New York City’s community composting network. 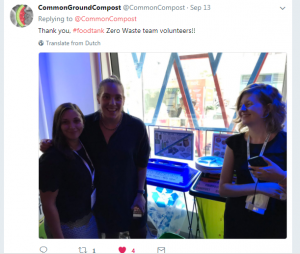 There were dozens of inspiring speakers including Brian Wansink from Cornell Food & Brand Lab, John Boyde Jr. of the National Black Farmers Association, Dan Barber of Blue Hill, Carina Millstone of Feedback, Loren Cardeli from A Growing Culture, Chris Cochran of ReFed, Monika Munn from the Rockefellar Foundation, Joan Briggs from the Fink Family Foundation, and Pete Pearson from the World Wildlife Foundation.

I learned about cutting edge research and technologies like the Food Keeper App, as well as an App being developed by Brian Roe at the Ohio State University to collect photos of your plate to measure food waste, and a delicious smelling piece of paper made from fenugreek that keeps food fresh. Date labeling, design, regulation, and consumer behavior were recurrent themes.

Pete Pearson, from the World Wild Life Foundation warned “we can’t recycle our way out of the problem of food waste.” Because converting food waste into energy does not come anywhere close to recapturing the environmental input of growing food. It doesn’t hurt to be reminded that we aren’t growing food just to compost it or anaerobically digest it!

Loren Cardeli from a Growing a Culture waxed elegantly about the many uses of the Black Solider Fly larvae, as both composter and food source. He argued that the most important food waste innovations will not come from from Silicon Valley entrepreneurs but from the world’s peasant farmers.  According to Loren, “The revolution will not be televised, but it will be open source.”

Carina Millstone from Feedback, suggested we  take a closer look at the global political economy of food provisioning if we are serious about addressing food waste. Researchers at Feedback investigated the causes of food waste in the supply chain, and found that they stem largely from unequal trading relationships between large retailers in the Global North and farmers in the Global South who are held hostage by unscrupulous business practices and ever changing beauty standards for fresh food.

New York’s unique blend of grassroots and municipally driven food waste initiatives was also well represented by GrowNYC, Lower East Side Ecology Center, City Harvest, and the Department of Sanitation. Environmental justice advocate Councilman Anthony Reynoso highlighted the important contributions that the youth led community composting business BK Rot is making. Emily Bachman from GrowNYC reflected on what a transformative experience community composting can be. And Liz Balkan from DSNY spoke of more exciting  changes to come, as the City continues the roll out of the Organics ban and other Zero Waste policies.

I had a great time learning about industry, business, academic, policy, and grassroots approaches to the problem of food waste. Now lets see what we can accomplish by bringing these diverse perspectives, skills, and capabilities together! I would like to thank the organizers for putting together such a comprehensive and well organized event. And, in case you are wondering about the waste we sorted : three bags of compost, three bags of mixed recycling, three full buckets of liquid, and just half a bag of trash.

Share This:
« Thank You Food Sharers of Barcelona!
Thank you Food Rescuers of San Francisco! »